Last night at dinner with some friends of my grandmother’s, I found myself casually throwing out the statement, “Everyone hates the Jews.” I said it without thinking, but instead of getting the expected chuckle, it started a conversation.

“Is that how you really feel? That the world hates the Jews?” I was asked a question I had never had reason to answer. Usually I would simply say yes, that is how I feel. But tonight I began to wonder if perhaps my statement could use some rephrasing, or further investigation.

Do I really feel that the world hates the Jews? No. I firmly believe that generalizations can never be made, so already my assumption is inaccurate. Of course not everyone hates the Jews, but some certainly give me that feeling. Misconceptions about life in Israel upset me the most.

When people think of Israel, do the terms “full human rights” and “complete religious freedom” come to mind? They do for me, but I know a lot of people think the opposite about Israel. I am in no way qualified to say who is right. All I know is that for me, Israel is day to day life, so obviously I would see it differently than someone whose only exposure is through the eyes of the media.

Last year a bomb went off at the central bus station in Jerusalem. I was very upset by this, particularly because the bus in question, bus no. 74, was a route I take almost daily. I was horrified when an online blogging friend of mine posted an article about the attack along with a painfully judgmental comment about Israel provoking Palestinians into setting off bombs. For him this reflected a failure on behalf of the US government to resolve an age-old conflict in the Middle East. He had no way of knowing that for me it was bus number 74, the bus I took to work. It hurt me to hear what I thought was an accusation against my own government, when truly it was just a different view of reality. 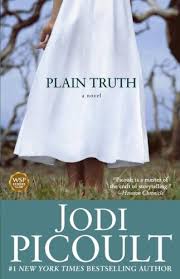 In her book, “Plain Truth,” (which I finished reading yesterday) Jodi Picoult tells the breathtaking story of an Amish woman who goes to trial for killing a baby. Although each of the characters came from a different background, every one of them faced the challenge of having to thrive in unfamiliar territory at some point during the book. Katie, Jacob, and Samuel had to adjust to the ways of the “English” world, while the prosecutor, the judge and Ellie, Katie’s attorney all had to get used to the Amish traditions. They all struggled to bridge two worlds which rarely met. They were forced to confront the one thing they had in common – humanity, which is not always good, and not always what you expect it to be. (For my full review on Goodreads, click here.)

When people come from completely different backgrounds, it’s no easy task to try to understand the way the other person thinks, especially when their actions seem offensive to you. I try my hardest to understand human nature, but some worlds are so far away from me that I’m baffled by their logic. Sometimes it is unreasonable to expect to understand someone so different. I think it all comes down to the message written in this wonderful book by Jodi Picoult. When it comes down to reality, even aliens can find a way to communicate.

The world in which you were born is just one model of reality. Other cultures are not failed attempts at being you; they are unique manifestations of the human spirit.